Melebi SA keeps innovating. 2010 we have released our latest model of Pipi-Stop® wireless (Swiss made) 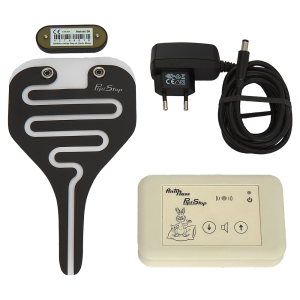 In 2000, we made a considerable step forward, by switching to the wireless transmission. Ten years later, the Pipi-Stop fulfils the CE standards and its commissioning is even easier than before.

We developed a new design for the receiver and a more efficient adjustable sound. Thereduced size of the transmitter that is snapped onto the urine detector which the child places in his underwear, is particularly significant for this technological advance. It definitely provides the child with more comfort. The autonomy of the transmitter has been considerably improved and the waves (emitted only during the urination of the child), are even lower (about a million times less than a mobile phone).